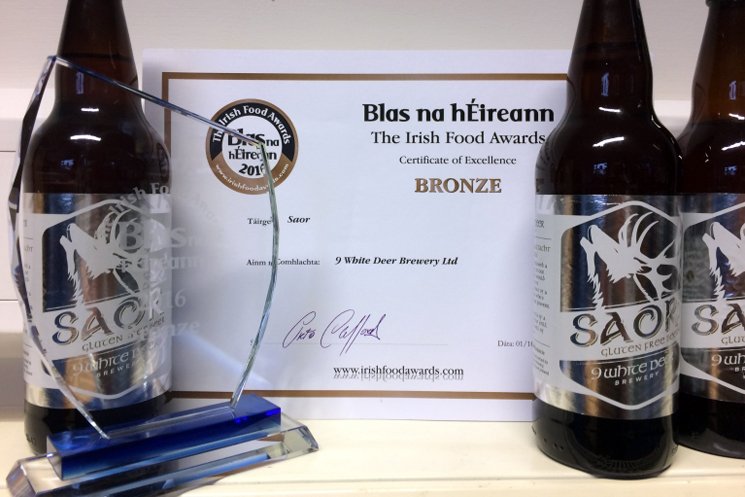 9 White Deer Brewery, Ballyvourney, Co Cork had a successful weekend in this years Blas Na hEireann awards, Dingle was packed with the cream of Irish producers.

Saor, a Kolsch Style beer picked up a bronze medal for all of Ireland – Beer and Lager category, this is a big beer award, the fact that Saor is gluten free did not come into play as it is a blind tasting.

9 White Deers aim in creating Saor was that it should taste like beer should, I think it’s safe to say this has been achieved and surpassed. Most gluten free beers are made with Sorghum, millet or another grain containing no gluten, 9 White Deer Brewery re-wrote the rulebook with Saor, it is made from 100% barley and removed the gluten through clever brewing techniques, the first brewery in Ireland to do so.

9 White Deer Brewery was created in 2013 by Gordon Lucey and Don O’Leary, the company now employs nine staff with sales expected to increase significantly next year. While still a relatively small company it continues to punch above its weight with innovative brewing, reflected in the industry awards now collected, last year they won a Gold Medal in the Beers & Ales category for their Black Lightning IPA at the Irish Quality Food and Drinks Awards.

“This is a big deal to us giving great exposure to our brewery, we are very excited about the future of craft brewing in Ireland and delighted to receive such a coveted award.”

9 White Deer Brewery is nestled in the heart of West Cork, Ireland making the highest quality Irish beers with Irish ingredients. This Craft Brewery was brought about by two people, Gordon Lucey and Don O’Leary. They both have a passion for quality beer and they have a lot of experience in all aspects of beer from growing barley to front of house customer experience and everything in between.
View all posts by admin →

Draft Beer at Home with The 9 White Deer Keg Tap